Brazil has been disappointing

Former LA Galaxy forward Landon Donovan said that Brazil has been disappointing in the tournament in Russia. He said that there were so many expectations on the team and that they were the favorite to win the World Cup but they did not perform at all.

He said that the team still suffers the same problem as four years ago where they were relying too much on Neymar and that they do not know what to do when the opposition defence manages to stifle their star player Neymar.
END_OF_DOCUMENT_TOKEN_TO_BE_REPLACED

Miami Beckham United (MBU) said they reached another major milestone by acquiring the land to build the privately funded stadium. They asked that the MLS help them move forward with the dream of a soccer club that Miami has been waiting for. END_OF_DOCUMENT_TOKEN_TO_BE_REPLACED

“When our nations come together as one, as we will for 2026, there is no question the United States, Mexico and Canada will deliver an experience that will celebrate the game, serve players, supporters and partners alike,” Gulati said at a press conference as they made the pledge. END_OF_DOCUMENT_TOKEN_TO_BE_REPLACED

He admitted that there were interests from different teams, but he has yet to take a decision about his future. He said that teams in the MLS will be starting their pre-season training in around two weeks and that he will have to make a decision now if he is going to pursue his career in the United States. END_OF_DOCUMENT_TOKEN_TO_BE_REPLACED

“Two weeks ago, I was working as an analyst on the LA Galaxy vs. Vancouver Whitecaps match and during that game, the Galaxy suffered injuries to three players: Jelle Van Damme, Steven Gerrard and GyasiZardes. Over the next few days, Nigel De Jong was transferred to Galatasaray and news broke that Gyasi would be out for the rest of the season.
END_OF_DOCUMENT_TOKEN_TO_BE_REPLACED 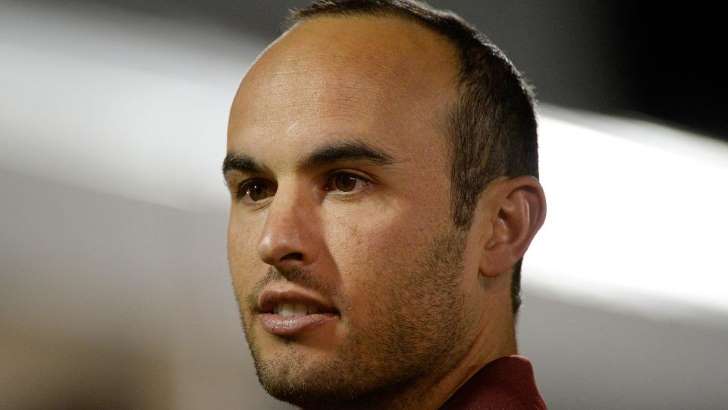 “The new owners met with me a few months back and said this is likely going to happen and admitted that they didn’t know a lot about football. [They said] ‘We know that you know the game and you’re passionate about it, you played at Everton, spent time in world football and sort of understand it a little better, would you be willing to help us, advise us and consult with us on certain things?’ I said yeah, that would be great and that’s something I am certainly open to,” Donovan told the NBC Sports about his new role.
END_OF_DOCUMENT_TOKEN_TO_BE_REPLACED

Landon Donovan might be out of the active games, but he is still leading new teams and introducing fresh spirit in US soccer in different ways.

For instance, an MLS home grown team has been picked by him and it is said that he would be leading this team against his old adversaries.

This is the third year that he has been part of the coaching team that has been working on MLS as well as the national team of US. The home grown team competed in the 2016 Chipotle MLS home grown game which will be featured on July 27th in San Jose. This will be a day before the all star MLS game is played against the heavyweights like Arsenal FC of the English Premier League. The opponents of the team this year would be the under 20 team from Mexico. They had been winners of the U20 Championship that was held in 2015.

The selections for the upcoming game include players from Seattle Sounders like Jordan Morris and others like Tommy Thompson, who is a skillful international player from the Bay Area. END_OF_DOCUMENT_TOKEN_TO_BE_REPLACED

He believes that Klinsmann has different options at the moment, and he is surely going to find a system that will allow the United States to be dangerous in attack without taking too much risk at the back. END_OF_DOCUMENT_TOKEN_TO_BE_REPLACED

He recently spoke out in favor of removing wage discrimination for the women’s team. The wage dispute that has arisen with US Soccer and USWNT is shocking for many. Landon has voiced his concerns and states that the women’s team should be treated equally as the men’s team when it comes to providing compensation and other benefits. Usually, compensation is decided as per net revenue proceedings. END_OF_DOCUMENT_TOKEN_TO_BE_REPLACED

Despite having his own share of critics, Millner has come to the rescue of his England teammate John Stones. The Everton defender was guilty of giving the ball away in the build-up to the goal that allowed Holland to equalize. James Millner has encouraged Stones to take the critics as a compliment and to work harder to please the fans. END_OF_DOCUMENT_TOKEN_TO_BE_REPLACED